the sound of a higher being – Sting 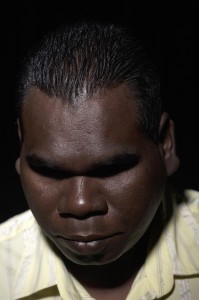 Gurrumul is an Australian Aboriginal singer who sings in the Yolngu language. He was born blind. He belongs to the Gumatj clan on Elcho Island, off North East Arnhem Land, Northern Territory. He first came to attention when he released his debut album Gurrumul to international claim in 2008. He was nominated for four ARIA awards winning Best World Music Album and Best Independent Release.

He also won three Deadlys, for Artist of the Year, Album of the Year and Single of the Year. His second solo album Rralak in 2011, went Gold.

He has become an enigma in the Australian music industry. His fragile but powerfully emotive voice has affected the public in a way no other artist has done. Gurrumul sings songs about identity, ancestral beings and connection with the land.

Gurrumul will change the way you breathe – Kathleen Noonan